The NoahFace App displays different screens for different business applications. You can select one of the following screen types:

Once you have selected a screen type, you can further configure the screen by specifying appropriate screen details. The sections below explain the available options and syntax for each type of screen.

The Access Control screen is used to control access to secure areas, such as offices, factories, machine rooms, and storerooms.

The Access Control screen simply displays either:
The Display/Unlock time, which is configured under the Access Point Type, controls how long this screen is displayed.
‍ 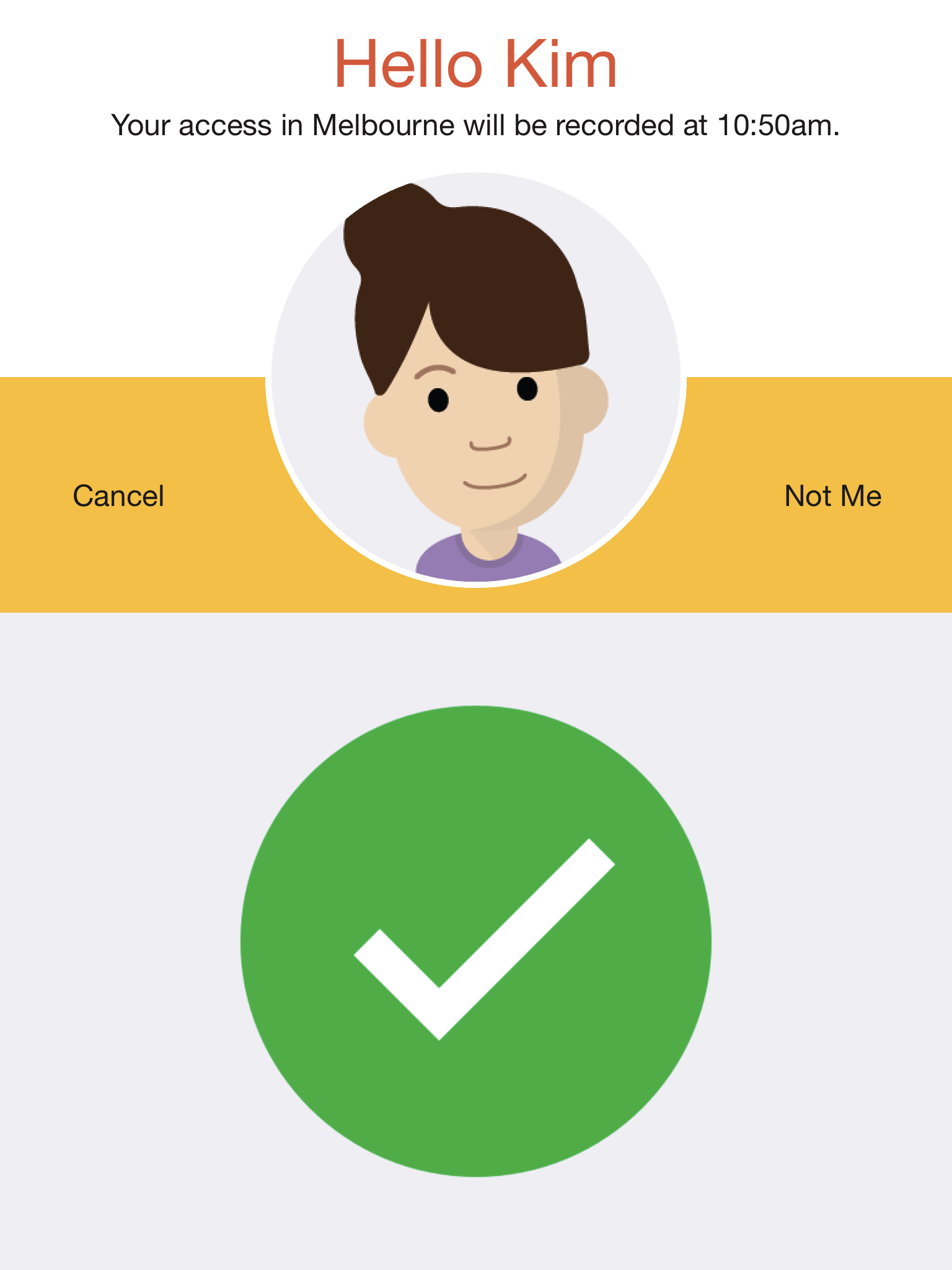 The Attendance screen is used to record attendance at marketing and training events, as well as to take roll calls at schools, clubs, etc.

The Attendance screen displays a single "Present" button. Users are required to press this button to record their attendance, and when they do a Green Tick will be displayed.

You can also change the type of event generated by specifying an "event" option of "clockin" or "clockout" (by default it is "present"). This is useful if you want to use two separate devices, one for clocking in and one for clocking out. For example, if a device was dedicated for staff clocking in, you would specify the following: 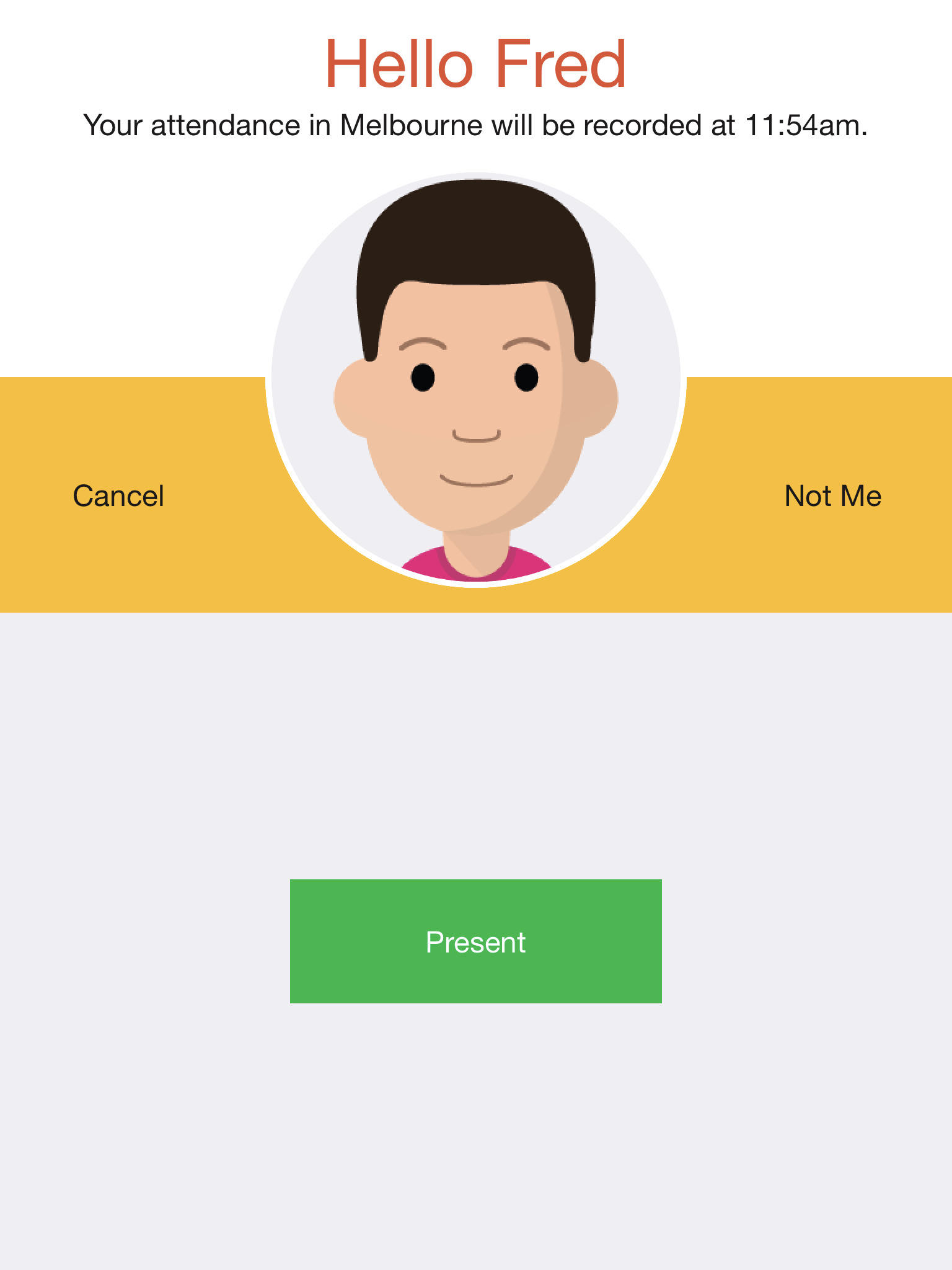 The Clock In/Out screen is used by shift workers to clock in to and clock out from a workplace. This allows you to pay staff accurately for the number of hours worked.

The Clock In/Out screen has two buttons as follows:

The text on the buttons can be changed by specifying the "in" and "out" options in the screen details. For example:
‍
in=Start Shift, out=End Shift
‍
The Clock In/Out screens can be further configured to allow you to collect data during your clock in and clock out events. For example, you might want to:

The full syntax for the "in" and "out" options is as follows:

where <button> is the button text, <type> is the type of data you want to capture , <label> is the name of the data field, and <details> are the type specific details. There are four types of data you can capture as follows:

A <type> of "text" is used to capture an alphanumeric string, such as the name of a customer. For example:

A <type> of "number" is used to capture a numeric string, such as a project number. For example:

A <type> of "list" is used to capture a selection from a list, such as a list of active projects. You can either explicitly define the list options (list items are semi-colon separated), or specify a user specific list (by specifying a hashed attribute name). You can optionally specify a default value as well. For example:

A <type> of "multi" is used to capture multiple selections from a list, such as a shift conditions (list items are semi-colon separated). You can optionally specify the minimum number of selections, which defaults to 0. For example:

out=Finish:multi:Conditions:Hot;Cold;Rain; Snow;Windy:1
‍
A <type> of "range" is used to capture a numeric value from a range of numeric values values. You can specify the minimum, maximum, and default values for the range. For example: 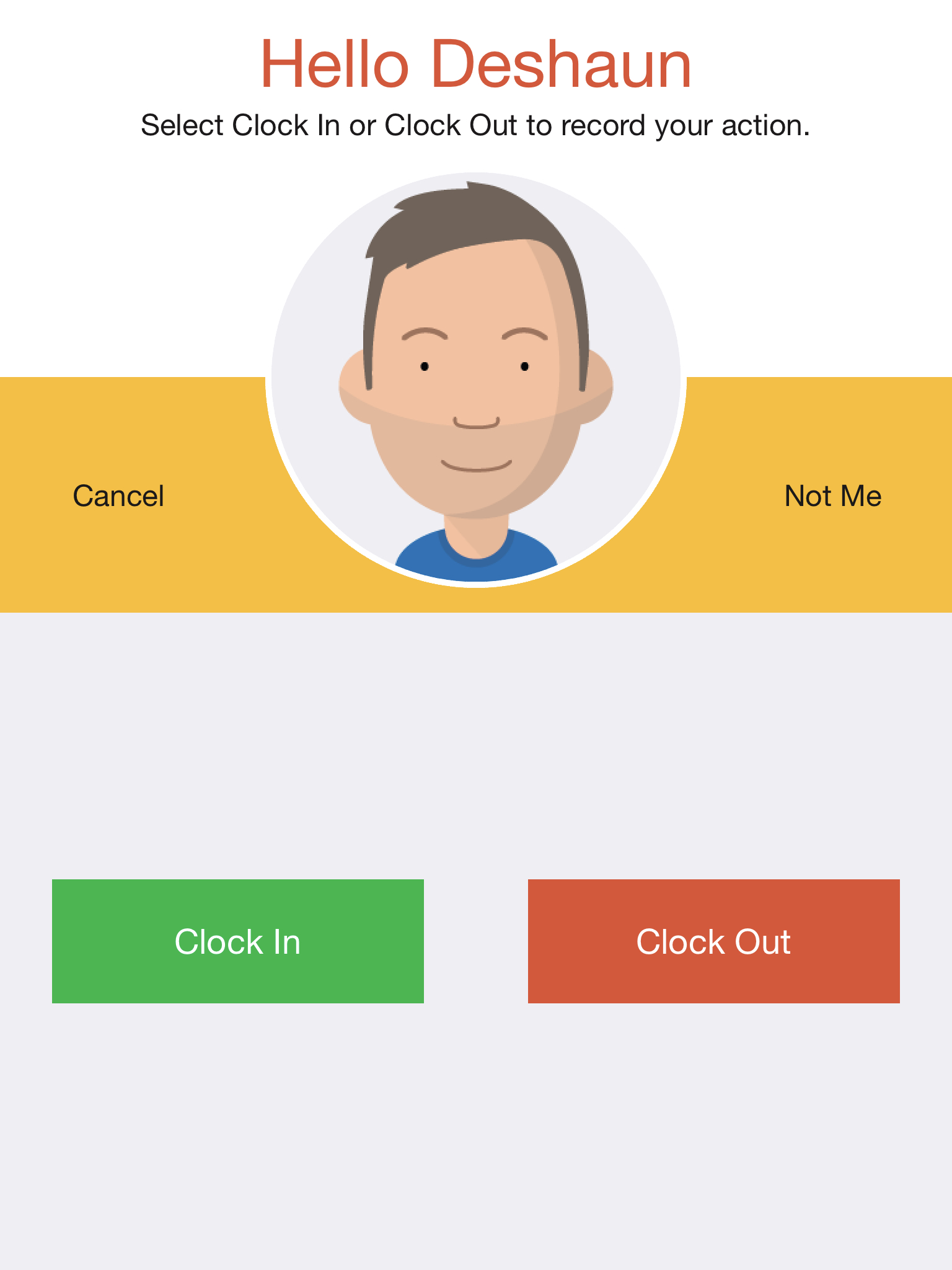 The Compliance screen is used to ensure compliance with a set of policies or conditions of entry before granting access to a secure or dangerous work site.

The Compliance screen displays a series of policies as check boxes. The user must acknowledge each one, and then press the "Accept" button.

The list of policies can be configured by specifying the "policies" option in the screen details (policies are semi-colon separated). The full syntax for each policy is as follows:

To only present a policy once use a <frequency> of ONCE eg:

To present a policy periodically use a <frequency> of DAYS eg:

To present a policy randomly use a <frequency> of RANDOM eg:

If you prefer to have the policies pre-checked, just specify:

The name "policy" can also be configured. For example:

name=condition of entry
‍
Finally, the button text can also be configured. For example:

To specify more than one option, just comma separate them. A full example is as follows:

name=condition of entry, policies=I understand I am entering a dangerous work site and will wear a safety vest at all times.:P1:ONCE; I agree that I will follow the directions of the site supervisor at all times.:P2:DAYS:90; I am not under the influence of illicit drugs or alcohol.:P3:ALWAYS; I will try to be happy today.:P4:RANDOM:100‍ 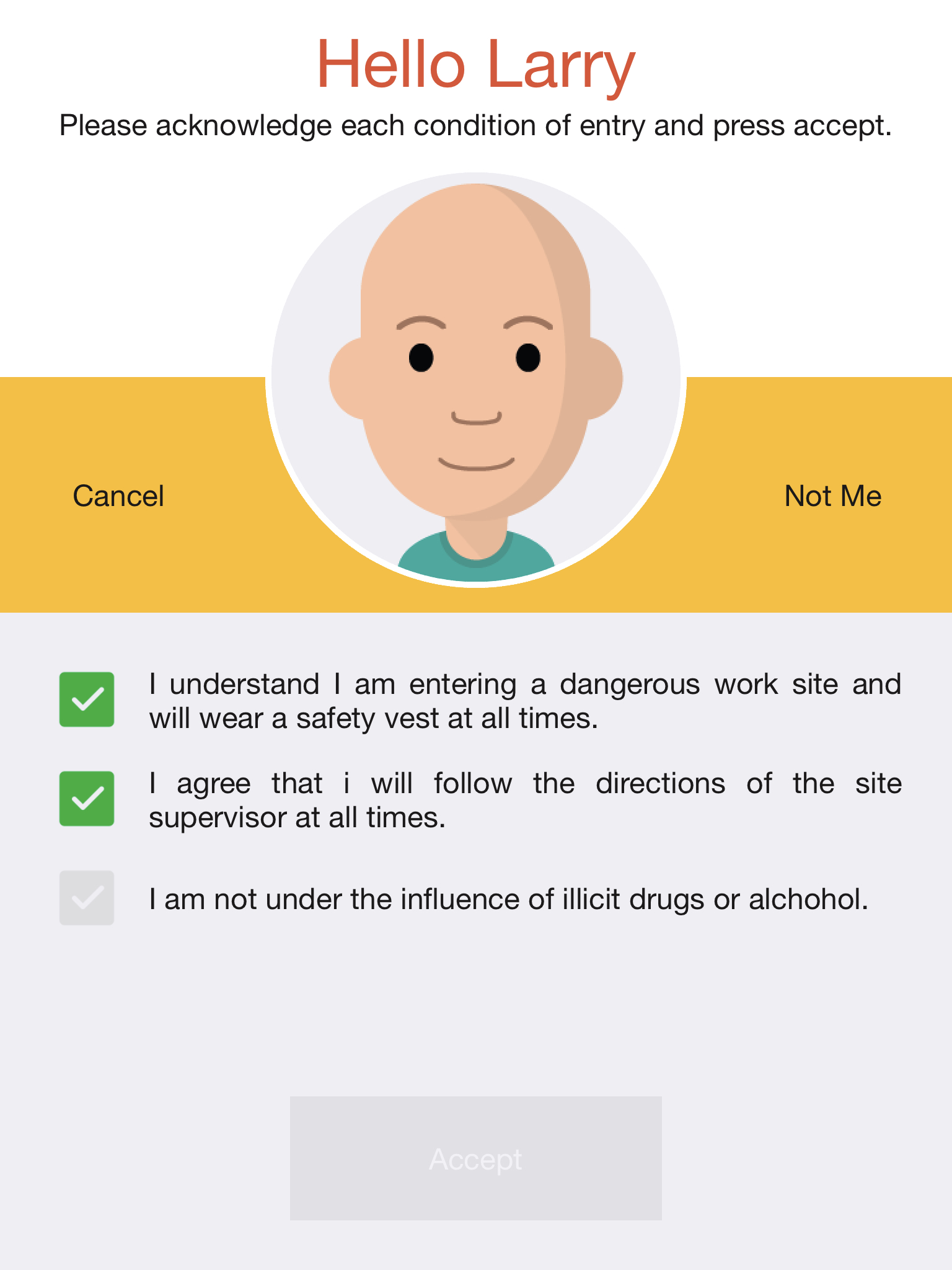 The Job Tracking screen is used to record the time spent on each job (by job number) and who worked on that job. This allows you to measure and improving efficiency and quality.

The Job Tracking screen will display the currently active job or jobs, and has three buttons as follows:
When a user starts a job they are required to enter a job number and optionally select a job type.

The list of job types can be configured by specifying the "types" option in the screen details (types are semi-colon separated). Each type can be either just a name or a name and a corresponding value (colon separated). For example:

The text on the three buttons can be changed by specifying the "start", "stop", and "out" options in the screen details. For example:

mode=user
‍
To specify more than one option, just comma separate them. For example: 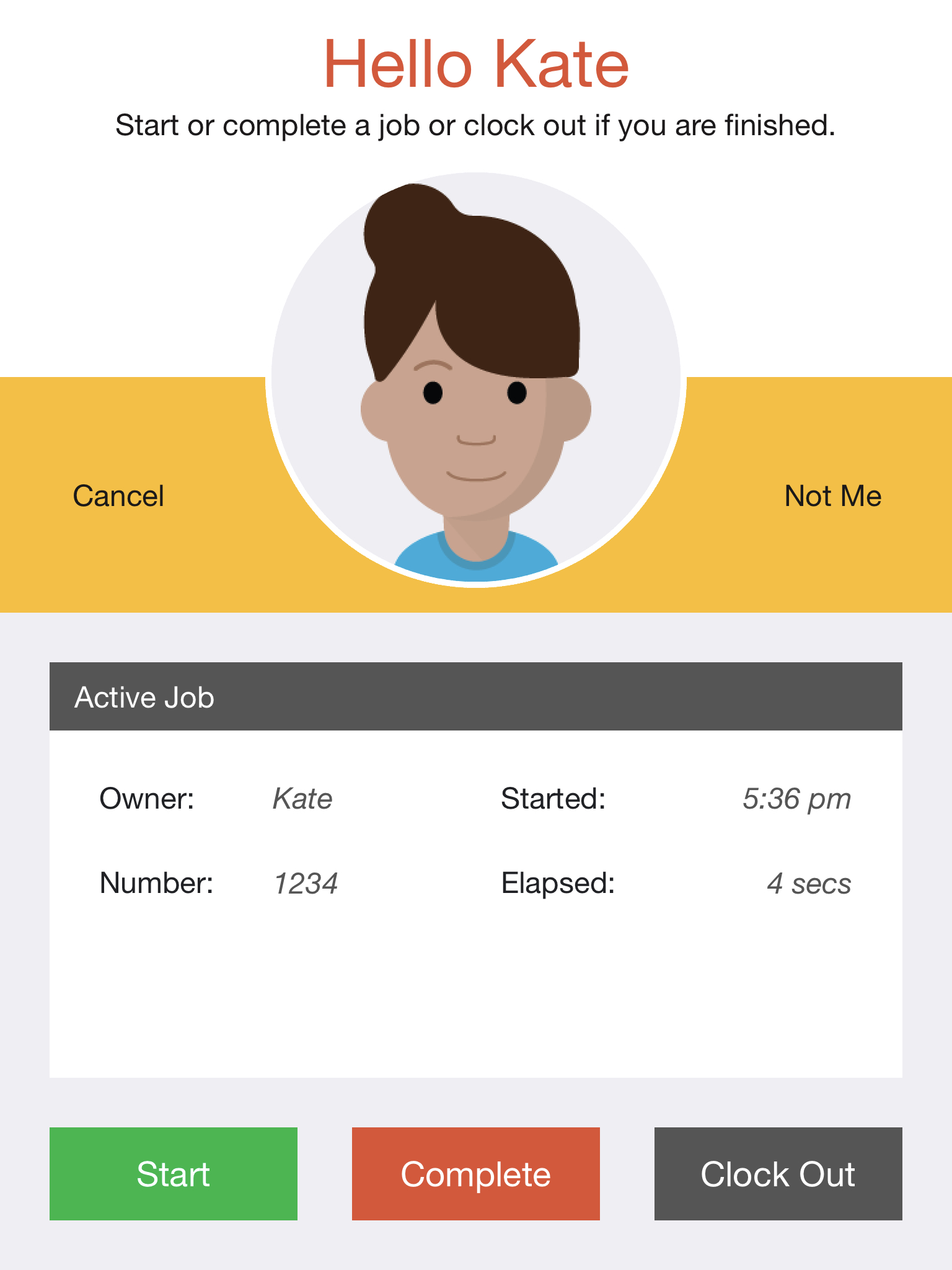 The Task Tracking screen is used to record the type of tasks being worked on throughout the day. This allows you to apply different pay rates to different task types.

The Task Tracking screen will display up to nine task types as a series of buttons. If there are more than nine task types, the last button will say "OTHER..." and this will pop-up a selection window. Users are required to press one of the task buttons whenever they start a task, and the "Clock Out" button when they are finished for the day.
‍
The list of tasks can be configured by specifying the "tasks" option in the screen details. You can either explicitly define the list options (list items are semi-colon separated), or specify a user specific list (by specifying a hashed attribute name). Each task can be either just a name or a name and a corresponding value (colon separated). For example:

You can change the terminology of "task" to something else by specifying the "name" option in the screen details. For example:

You can change the text on the Clock Out button by specifying the "out" option in the screen details. For example:

You can hide the Clock Out button altogether by specifying the "hideout" option in the screen details. If you do this, the maximum number of visible task buttons increases from nine to twelve. For example:
‍
hideout=true

To specify more than one option, just comma separate the options. For example: 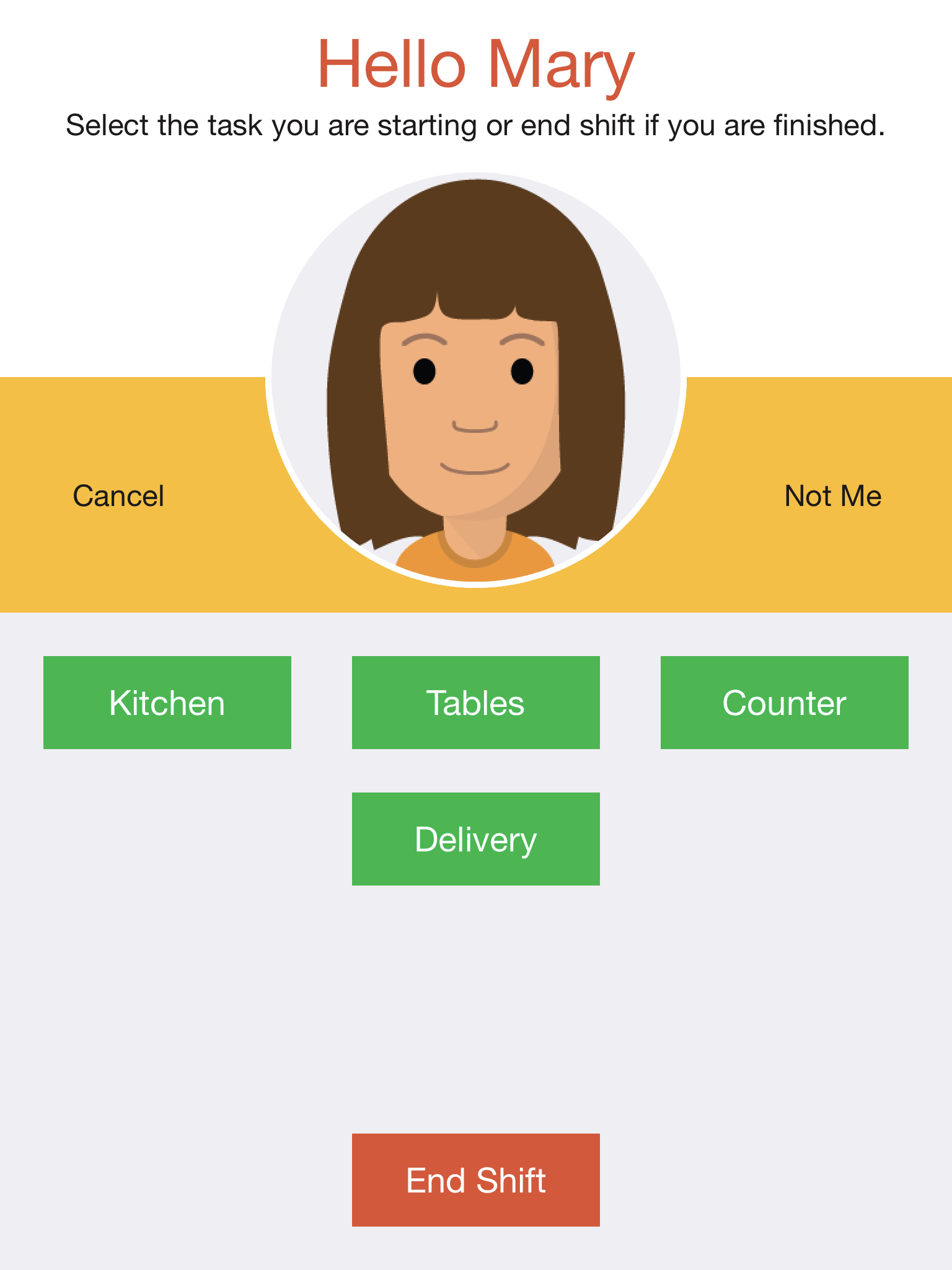